Diving along the Great Barrier Reef has been on my list for a long time. After having been there I can wholeheartedly say that it is absolutely worth it. We did a weeklong life-aboard on the outer reef and it passed way too fast. We did this trip in four stages. First a couple days in Sydney to acclimate and get over the jet lag. We then flew to Cairns where our boat departed. The main act was diving long the Great Barrier Reef. Finally we spend a couple days in Melbourne looking for Australia’s other famous critters. There are a couple pictures and impressions of the non-diving part in the Australia 2019 post.

We chose to spend our week on the Great Barrier Reef aboard the Spoilport, a custom dive live aboard run by Mike Ball Dive Adventures. It was perfect in every way with a phenomenal crew. The original itinerary was to spend 4 days diving the Coral Sea near Osprey reef and then 3 days on the actual GBR. Unfortunately, the weather was not with us and we could not make the crossing. It was just too windy. On the upside, we got to dive a couple more days on the GBR.

As an added bonus we had several encounters with Dwarf minke whales. It was already past their prime season at this location, but a couple did decide to hang back. These encounters are snorkeling only, which is nice as there is no limitation on how long you get spend with the whales. It is entirely up to them to decide. There are no pictures as my little camera that I normally take on snorkeling gave up on me. Still, seeing these beautiful animals is amazing.

The rest of the actual diving is also nothing short of amazing. We encountered a huge variety of animals of all colors and sizes, big reefs full of healthy corals and calm waters. Over the course of the week I got a total of 22 dives and 19.5 hrs below the waves with a couple stories to tell.

First off was the encounter with a large Olive Sea Snake. These are amongst the most lethal snakes anywhere, but do not attack humans. This one snake, however, took a liking to my dive buddy and decided to go after her. Not to harm, but simply out of curiosity. It was quite impressive to see this huge snake move about and checking out a diver. Needles to say, my dive buddy was far less interested in the snake.

Another dive was marked by a group of huge, (American) football sized, cuttlefish. I have seen plenty of them before, but they are usually rather skittish and maybe fist size. This one did not care at all that I was there and proceeded to poke around the holes of a coral mount to find a good spot to deposit her eggs.

Lastly, it is interesting to compare the GBR with Fiji and Indonesia, the two regions in the coral triangle I have been to. Indonesia has more colors on the corals of the Bunaken National Park, but mostly smaller critters. Fiji has more soft corals. The GBR appears a bit subdued at first, but has much more and much bigger marine life. The reefs have suffered from global warming and patches of coral bleaching can be seen occasionally even on the outer reefs. It is still a beautiful sight to be seen, though. There is an enormous diversity of life out there. 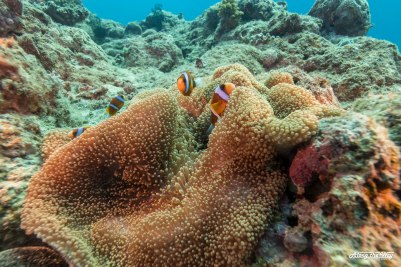 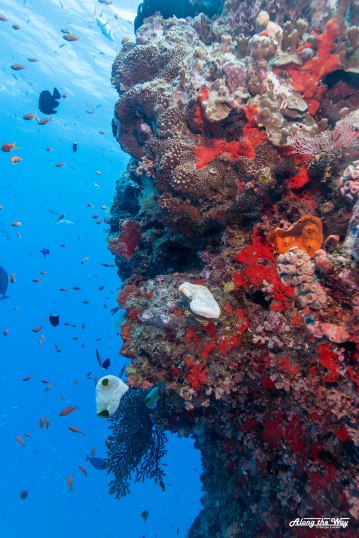 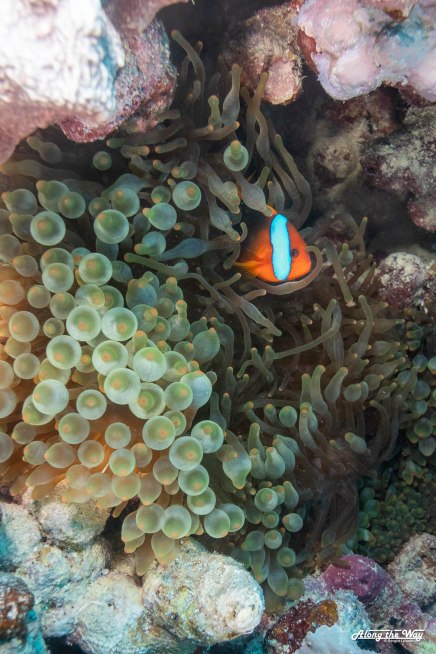 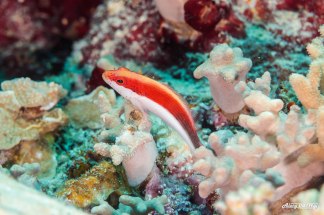 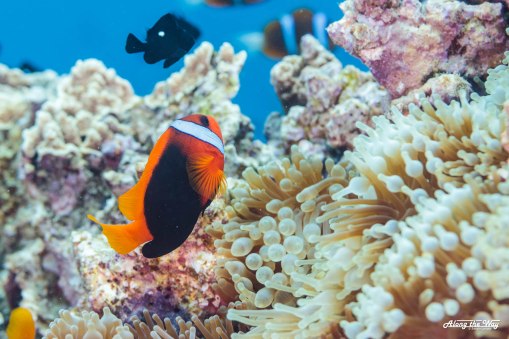 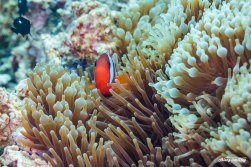 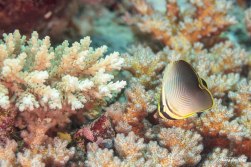 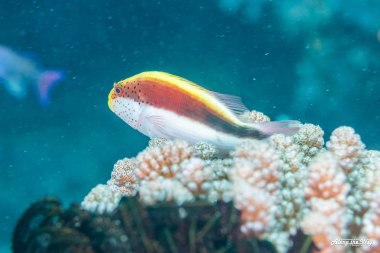 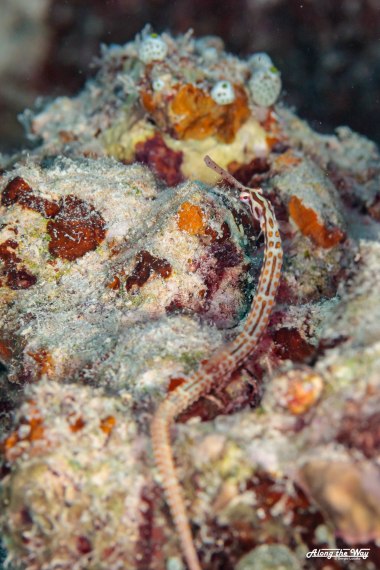 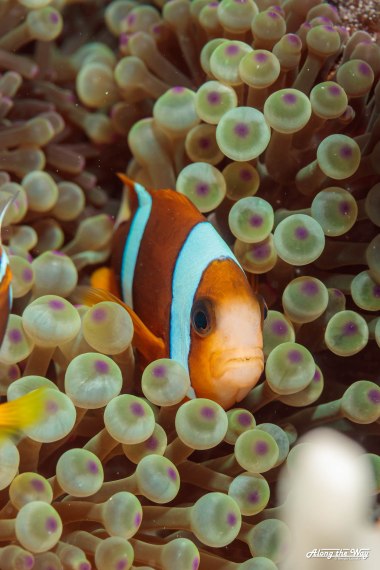 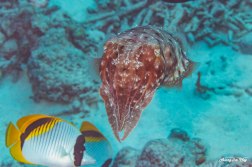 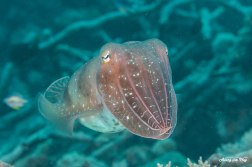 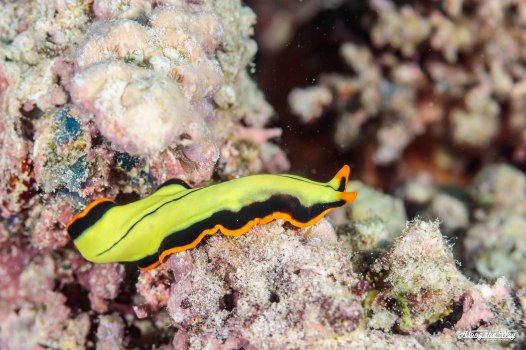 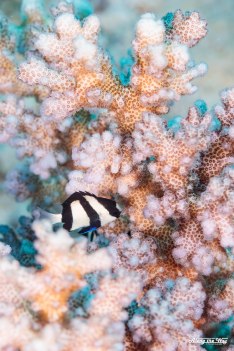 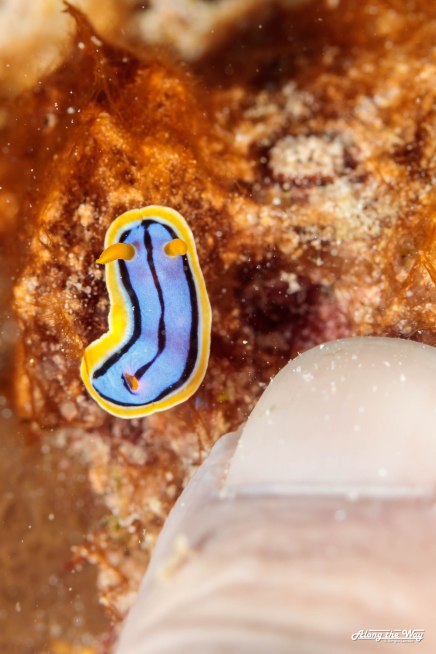 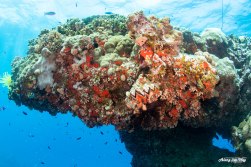 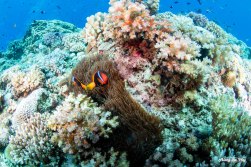 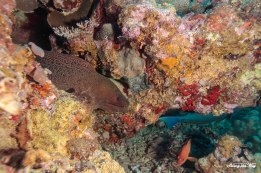 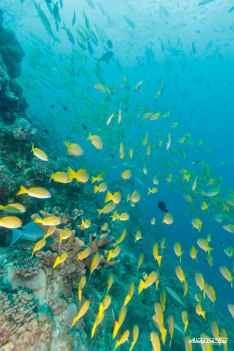 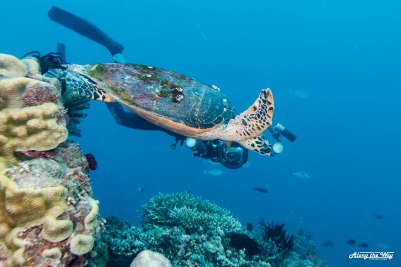 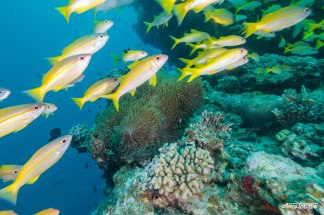 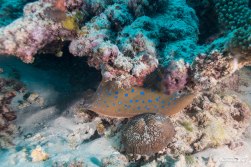 2 thoughts on “Diving along the Great Barrier Reef”