This was one amazing trip with a couple twists and turns, both literal and figurative. It started with me wanting to do some night photography in Death Valley again. A couple years ago I went to Eureka Dunes in June and it was an awe-inspiring moment to sit under the Milky Way. This time around two good friends signed on to enjoy the sights and also do the hike to Telescope Peak with me, something I wanted to do for a long time.

The start of the trip was under less fortunate stars, though. After driving for 3 hours, I stopped for gas and the Jeep would not go into gear anymore. Fearing that I had somehow broken the transmission, I called AAA. After an hour in Trona, CA, a sad little place, the tow truck driver suggested I check the coupling between the transmission and the cable that goes to the shifter inside. Lo and behold, the bushing had busted. It is a little rubber piece they put in there in lieu of real hardware. For the rest of the trip, anytime I had to shift gears, I had to put on the parking brake and crawl under the Jeep to manually shift it. It is a bit annoying, but a fairly common issue with Jeeps and not all that bad with an automatic. Now knowing what was wrong, I felt comfortable with going on.

It was a good call. The night sky was amazing. Not only was it new moon and we were in a dark sky area, but there were also a couple meteor showers. The Perseids have already started, although still at low intensity. Less famous, but more active now, are the Aquariids. Of course, the Milky Way was the main attraction. This time of the year, the entire arm and the center is visible. I just cannot get enough of it.

The hike up to Telescope Peak was scheduled for the next day. It is a 12.8 mile hike with 3600 feet elevation gain. The first 2 miles is a steady climb along the side of Rogers Peak. It did not seem all that bad on the way up, but coming down a couple hours later was grueling. After about 1 mile, the trees gave way to a beautiful view of Badwater down below in Death Valley. The second stage of the trail is about 2 miles of mostly flat terrain around Bennett Peak. Both Panamint Valley and Death Valley stretch along below as the trail meanders along the saddle. The final stretch is a steep uphill climb following a series of switchbacks, which my calves were not at all happy about. However, once on top of Telescope Peak, all was forgiven. The views are magnificent. As the saying goes, what goes up must come down. And so we went. Of course by now the sun had switched sides and so the same side of me that got sun on the way up, was getting more of it on the way down. Suffice it to say that I have a very uneven burn now. That night we were treated to more of the gorgeous night sky while my legs were slowly recovering.

It was a great trip with great friends that I will remember for a long time.

Finally a 360° panorama from the top of Telescope Peak 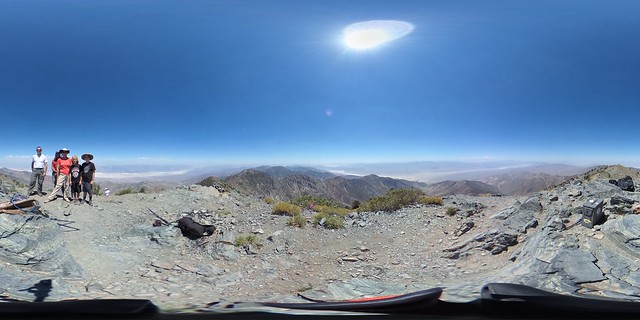