Once more I managed to get on a boat on short notice to take advantage of a rare free weekend. Photography wise, I was a bit conflicted this time. I got a brand new housing for my new Canon 80D and really wanted to play with it. On the other hand I was just too lazy to put it all together and carry it along.

That is not to say that I did not have a camera at all. I took my old, but trusty point-and-shoot and also my other new toy. By now, you might have seen some of the 360º panoramas on Facebook, Google and Flickr. I have always been intrigued by them, but really wanted to do that under water. Nikon has launched the Keymission 360, which does exactly that. So I got myself one on launch day and took it along as well. The next two photos are the first results. You can pan around in them. It is pretty neat. 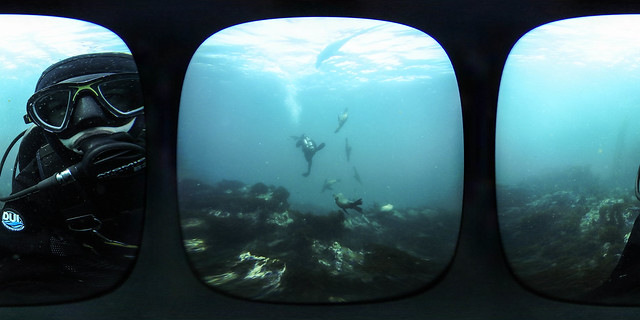 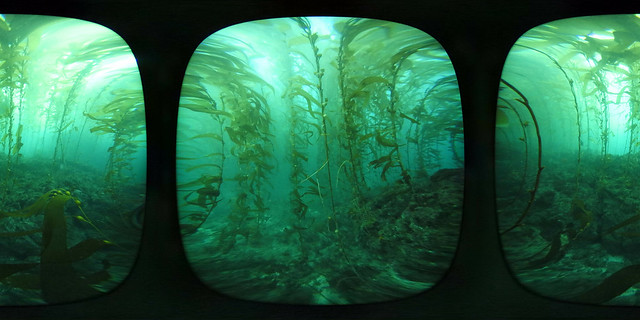 The day started out fairly windy and so we were limited to Anacapa’s backside. That is not a bad thing, though. Still great dive sites. Especially if one can convince the sea-lions to come out and play. I did not have much luck all of summer this year, but today they came out in force. They are just great fun to watch and are very inquisitive. They will come up right in your face. The old point-and-shoot is a bit slow and suffers badly from shutter-lag. That is the lag between pressing the shutter button and the camera actually taking the shot. With sea-lions zipping around a breakneck speeds, I have tons of photos with only the tail end of them.

When I was not looking for the pinnipeds, I was searching for octopi. And in this I got lucky as well. I found a couple and after a while they would even come out of hiding. On the first dive, I even got to to witness a fight. It was fast. I was focusing on one octopus out in the open and next thing I am engulfed in a sea of ink and the two octopi are up in one ball. I only managed to get one photo. It is labeled ‘Octopus fight’.